Today, the inbound cars to Sanderson were waiting at the interchange so there won’t be another night spent in the caboose.  I think the brakeman was sort of hoping for the possibility of another one of Missy’s home cooked meals.  What had begun as a fairly easy day now didn’t look so easy.

As the heavy train finally returned to Sanderson we see two loads of cement, a tank car of gasoline for Sanderson Fuel and Lubricants (fuel and lubricant sales have been brisk with all the Project activity).

A duel-engine motor scrapper for the Project, four loads of riprap

A motor grader, also for the Project, a boxcar for Western Wool, and a load of lumber for the local lumber yard.  Concrete construction requires a lot of wood forms.

First, the tank car of gasoline was spotted at the fuel dealer.

But before spotting the tank, the dual-engine motor scrapper, then the flat of lumber, and with the agreement of the project supervisor and the Lazy W Ranch, the four loads of rip rap had to go in first. 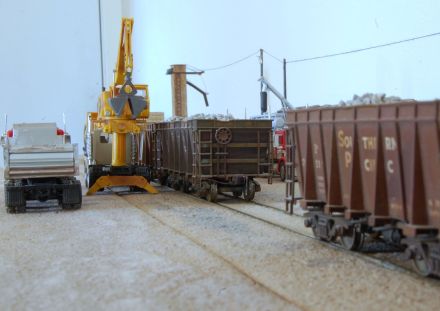 The two cars of cement were placed on the scoria track for unloading as the scoria operation did not expect to load more than a car a day for the next week.

The Lazy W Ranch agreed to let two cars of riprap to be placed by their feed bins but not unloaded there.  The Ranch did not want to risk damage to their bins with the unloading of riprap right next to them.  The contractor was very pleased with the new riprap being supplied now.

Of course, the LCN can’t forget their regulars customers and the boxcar was spotted at Western Wool and Mohair.  So what started out as an easy day for the train crew became a rather long day, but they finished within the hours of service.

The morning after the day delivering the cars that had been late arriving at the interchange (necessitating the crew spending the night in the caboose), the LCN crew finds the following in Sanderson.  The three cars of cement have been unloaded as has the last car of riprap.  The Lazy W Ranch’s load of feed is also empty.  There is a load of scoria ready to go to the interchange.  And the Safeway car is ready to pull.  The tank car of molasses has finally been released and will also go to the interchange

The crew quickly gathers up the empties on the team track.  Below, the empties are shoved against the scoria load.

The engine grabs the Safeway car and runs up the main to the head of the train.

With train assembled below, an air test is made.

The train pulls out onto the main and the conductor lines the switch behind.  The train heads for the interchange.

After some fitful rest, the crew woke up, ate a few of Bills beans and went to grab the interchange which had been very noisily left about 3:00 am!  This Bureau of Reclamation project is killing the LCN crew.  Always feast or famine on railroads!

The train finally arrives in Sanderson after an uneventful trip across the canyon.  The train has two more loads of cement, as well as a load of feed and a Safeway car.

Above are the two cement cars and feed car being spotted.  Getting that tank car of molasses unloaded is as slow as, well molasses.  It will have to be respotted.

Interesting, we have a Rio Grande cement car today.  Most of our cement cars have been SP/SSW cars.

After all the cars were spotted, the crew made a beeline to knock off and find their beds.

Many, many more loads of cement, aggregates, steel, lumber (for forms) and pipe are anticipated.  The trainmaster had anticipated five loads of cement yesterday.  Only two arrived.  That may mean a big run tomorrow.  Let’s hope the crew survives this.

Some readers have wanted pictures of the Limpia-Rescado Project.

Here is a picture of a Bureau of Reclamation project in New Mexico that is a few months ahead of this project. 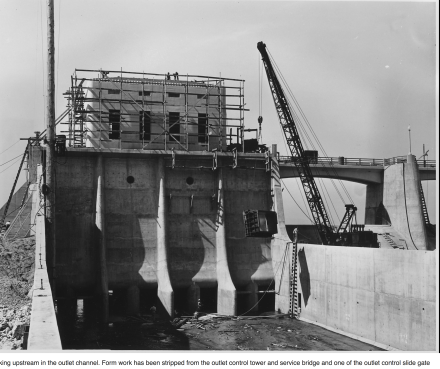 Below is what the Limpia-Rescado Project looks like right now.

Looks like they finally have gotten one of the loads of rock unloaded.

Two loads of cement have been unloaded and are now empties.

Time to head out up Limpia Canyon to the interchange.  If the new traffic is waiting on the interchange, the crew is looking forward to getting home on time.  That’s been rare since the Limpia-Rescado Project began.

All right, finally out on the main and making good time.  However, upon getting through the canyon and up to the interchange, the crew is not happy to see an empty interchange.

The crew gets its interchange positioned ready for the arrival of their interchange partner.  It is obviously running late.

Finally, Jed, the conductor, decides to walk up to the Taylor place.  The interchange is in a remote area and the closest telephone is about a mile away at the headquarters of the Taylor Ranch.   It is starting to get late, and Jed wants to know what to do, the crew’s hours are running short.  They need to leave very soon to have any hope of getting back before they are out of hours.

Missy, Mac Taylor’s wife, lets Jed borrow the phone.  What one must do working on a shortline!

After his initial call, the trainmaster calls Jed back and says stand pat.  The interchange train will arrive very soon and the contractors on the reclamation project are howling for more cement.  Jed knows this is probably BS but starts walking back to the train.  By now, it is getting to be dusk.

Needless to say, the interchange did not arrive and the crew had too few hours to make it home.  What a mess!  Knowing the interchange would eventually arrive and they couldn’t legally make it back to Sanderson, the crew decided to hole up in the caboose.  There were three bunks and Bill always kept a few cans of beans on board.

Fortunately, the beans weren’t needed, Missy drove out and offered them the chance to dine with the ranch crew.  Hot damn!–brisket, beans and tortillas!  Great chow.  Stiff bunks awaited them, but they enjoyed dinner at least.

Missy gave the crew a ride back and they played a few hands of poker before hitting the hay (or bunk).

When I was a kid in Houston racing down to the tracks to watch an ATSF, BN, SP, Rock Island, MP and MKT freight train roll by, “foreign” cars sometimes really sparked my imagination.  Cars from the Maine Central, Boston and Maine, Florida East Coast and the like, would make me wonder what those places were like.   I am pretty sure I saw a car like the subject of this post.  It’s road name probably just filled me with wonder.  I doubt I would have known exactly where to associate this car on a map–kind of like Nickel Plate Road or Wabash.

I was recently inspired to do this project by my partner on the site, B. Smith.  He created this car for his Limpia Canyon Northern.  Click here to see his post.  His version is new since he models a few years before I do.

As B. Smith shared in his post, the project is a bit harder than it looks.  Even though it is a fine model in most respects, Intermountain (or Red Caboose) made a couple of errors.  This car should have had a roof walk and a lowered brake wheel.   So to properly model the car, you must make some changes.

You must pop the brake wheel and housing off and lower to the proper height.  Fortunately, there are some great photos on the web.

The Fallen Flags site has a picture of the exact car I modeled a few years later in 1978–http://rr-fallenflags.org/el/frt/rbl.html

Hard to tell but on the A side of the car, I had to lengthen the ladders to go to the top of the car.

Note ladder extended upward on the right side of car.

I only lightly weathered the roof.  I am trying to depict a car that’s about 7-12 years old.  It was new in 1966.  I did a different COTS on one side to depict a bit more of a later version of the car.

B. Smith’s post has more details on the work needed to make an accurate version of this car.

I would sure like to be able to climb into a time machine and go back and watch trains with cars like these!  Until that is possible, at least we have our layouts.

The pace of the Bureau of Reclamation’s Limpia-Rescado irrigation project is picking up steam. 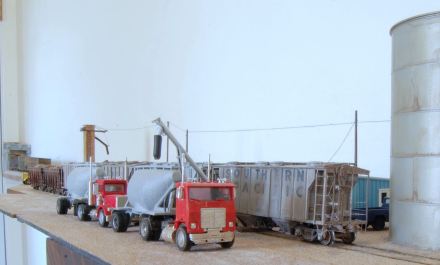 Contractors are unloading the cement while…

Finally, the contractor secures equipment to try to unload the stones.

Not an easy job. 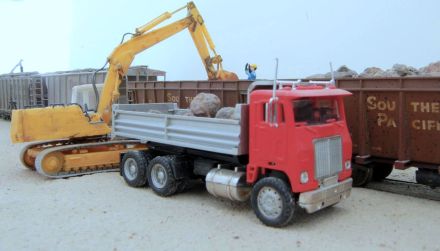 Some “cussing” is underway as to why a side-dump car was not used.  Apparently, the LCN prohibits the use of side-dump carts at this team track after the highway department created a huge mess a few years ago.

The excitement in Sanderson is building as the project takes shape.  Talk is that a warehouse may be built to ship onions along the spur, but we will see on that.

The Bureau of Reclamation’s contractors show up shortly after the cars are spotted to begin unloading.  The Limpia-Rescado project is at a stopping point until some cement is delivered.

The Limpia-Rescado Project is designed to add a couple of thousand acres in irrigation in the valley.  The Limpia Canyon Northern crew has been told to anticipate a little upturn in fertilizer traffic and possibly some loads of outbound onions in the coming years.

Now an interesting feature of the Limpia Canyon Northern is that most of the layout is set in 1990.   As a result, most cars are designed to be dual-era cars when possible.  These cars were becoming rarer by 1990, but some were still on the rails.

Here is the other side of the cars appropriate for 1990–

We will see in the coming years if the Limpia-Rescado Project affects LCN traffic into Sanderson.