As soon as the cars are spotted work begins on unloading the motor grader. 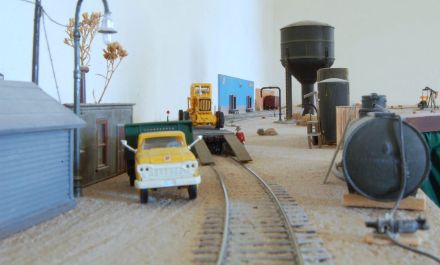 The project boys have a lot of unloading to do tonight to keep on schedule.
——
The next morning when the train crew arrives.  They find a rather upset project foreman.  The two cement cars have been unloaded so he needs more cement.  The two riprap cars that were not next to the feed bins are empty and his unloading crew is sitting idle waiting for the other two riprap cars to be re-positioned so they too can be unloaded.  The lumber has been off loaded from the flat car.  The motor grader up by the molasses tanks has been ramped off, but the big dual-motor scrapper has not, although it appears someone is working on getting it off.  The tank car of gasoline is still not empty but a connected unloading hose and the whine of a small pump can be heard working on getting all 8,000 gallons out of the tank car and into the storage tank.  As the engineer and fireman inspect and prepare the locomotive, the conductor informs the project foreman that as soon as the tank car is unloaded the riprap cars will be moved, but not until the unloading hose has been disconnected and the fuel dealer manager says it’s OK to move it.

Finally, the tank car is empty and the locomotive and caboose back down the spur and couple up all the cars except the flat with the motor scraper.

The empties are shoved down against the scoria load and the two loaded riprap cars are spotted so unloading can begin on them, which happens almost immediately.

The caboose just clears the crossing and the engine takes on fuel oil.  With all the extra project traffic, the crew wants the fuel level to be as full as possible before leaving town, especially after having to remain at the junction a couple of nights ago.  No way to refuel there! 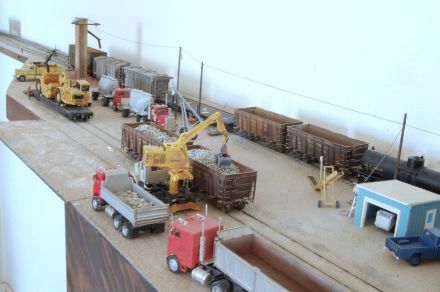 All that remains to be done is to pull the empty box from Western Wool, move it and the locomotive to the head end of the train, do an air test, and head to the junction.

The train finally pulls out.

The question now is, will the cars for Sanderson be at the junction?  How many will there be if and when they show up?  Tune in to the next post to find out!

Meanwhile, back in Sanderson, the motor scraper has been unloaded as have the two riprap cars.  I’ll bet the project foreman is burning up the phone lines demanding to know when his cement and riprap will arrive.