Per some, what Franklin actually wrote was–

“Behold the rain which descends from heaven upon our vineyards, there it enters the roots of the vines, to be changed into wine, a constant proof that God loves us, and loves to see us happy.”

I like that one too.  Kind of the same message either way.

Per the Beer Institute, there are a lot of folks out there trying to give us more “proof.”  There are almost 3,000 brewers in the United States.  About 200 million barrels of the stuff was produced last year or about 19 gallons per American.  That’s a lot of beer.  When consumed correctly, that’s a good thing–it makes a lot of jobs (including rail-related jobs) and brings us pleasure.  Also per the beer Institute, all 50 states produce it.

Beer production in the US

This two part series will discuss—

1.    rail involvement in the production of beer, and

A great deal of beer used to be shipped by rail.  Coors, one of my favorite quaffing beers, still ships some beer by rail.  (See my post of February 9, 2014 concerning the Coors distributor in Roswell.)  I like the thought of drinking “rail-hauled” beer.  I also enjoy non-rail hauled beer, but there’s something special about knowing my beer traversed America rolling through wheatfields and sunsets (not too many sunsets though).  I know…that’s weird–sorry.

(Think that’s weird?  I also like manual push reel mowers. Great States makes some good ones–click here to check mine out.  I love the cut of a reel–versus rotary–and the fact no gas is needed!  Where did that come from?  Don’t know…OK, back to beer and a slightly less weird discussion.)

From a rail standpoint, brewers pretty much fall into three categories—

3)    make limited use of rail or uses transload facilities (offsite)

I cited Coors as a representative of the first category.  Corona also ships by rail in box cars and containers (often hauled on trains).  Many brewers fall into the second category—two of my personal favorites are Shiner in Texas and Yeungling in Pennsylvania.  The last category is probably the majority since many breweries are too small to take advantages of the lower costs involved in rail shipments.  They may still use rail indirectly in that their raw materials may have been transloaded from rail cars before delivery to the brewery.

Up until the late 1990s or so, a great deal of finished beer was shipped by rail.  A craze for “fresh” beer led to a drop off in beer shipments.  Shaving a few days off delivery time was deemed worth the trouble of consuming more fuel (trucks) and hiring drivers.  (It seemed like a gimmick to me although freshness is important for some beer varieties.) 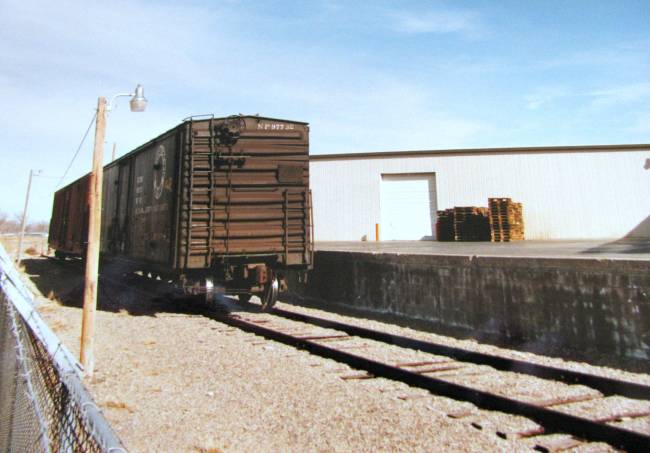 Load of Miller beer at the Roswell distributor in the early 1990s.

Beer still moves by rail, but less in box cars and more in containers.  Corona ships beer into the US by both box car and container. Many other foreign brewers ship by rail via containers.    Instead of the traditional box car delivered to siding at the beer distributor, nowadays, beer (and many other products) is often handled through a transload facility.

Corona Beer off the rails and ready to be loaded on trucks for final distribution.

Many brewers take advantage of rail to bring in materials.

Ingredients (barley) from the Northwest coming into the Shiner Brewery in 2011 in Shiner Texas. ©C Hunt photo

Many brewers receive ingredients by truck that have been transloaded by rail.

Barley being transloaded by auger from covered hopper to truck for delivery to the Lagunitas Brewing Company in February 2014.

A great video is posted here.  It shows the barley being unloaded, gates on the hopper being opened, car being moved manually and auger being positioned.

Hope you enjoyed this post on the involvement of railroads in the production of beer.  Part II will focus on the “beer caddies” used to get the beer from the brewery to the distributor, especially in the 1990s.

One thought on ““Beer is proof that God loves us and wants us to be happy.” — Benjamin Franklin, Part I”