The LCN has invited us back to accompany a run down to Sanderson.  It is a brilliant 75 degree day.  The H.W. Green grocer distributor, Budweiser Distributor, scoria loader and Lazy W Ranch Operation all need service.  It promises to be busy but easily manageable run.

(Note: this series is detailed, but an excellent overview of prototypical operations.  All too often, modellers just race around dumping and picking up cars without slowing down and really emulating prototype operations–thinking about dropping off the brakeman, walking to open turnouts, attaching brake lines, opening derails, etc.  If you really think about what is involved in operations, you won’t need a such big, maintenance intensive layout to have rewarding operating sessions.)

Here we go…(The captions will explain what is going on.)

The Sanderson Turn has arrived in Sanderson with two loads of beer, an insulated box for the grocery distributor, and two empty open top hoppers for scoria loading, being cut off on the main here.

The beer and grocery cars are pulled further down the main. Two loads of scoria on the right await being picked up on today’s out bound train.

The beer and grocery cars are cut off.

The light engine proceeds into the beer siding to pull an unloaded beer car.

The empty beer car is out of the siding now and the engine shoves just it through the switch. 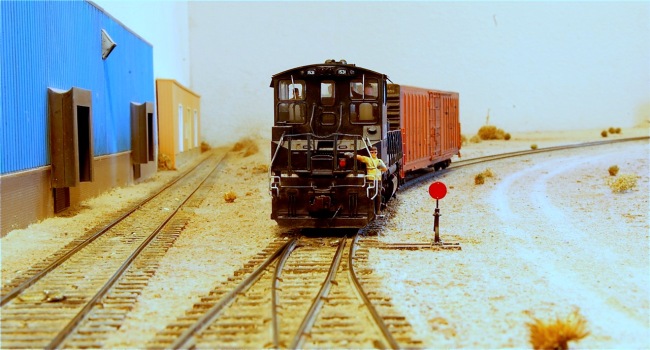 …and into the Lazy W Ranch track to couple into a tank car of liquid cattle feed. It’s not empty yet and will have to be re-spotted.

Two loads of bagged manure and an empty covered hopper are coupled into next.

Having grabbed everything from the track, the train pulls out of the Lazy W track and puts the cars on the passing track.

The tank car is re-spotted.

The empty covered hopper and two loads of manure are shoved down the passing track. The conductor flags the road crossing.

Well there are some additional movements to perform here in Sanderson on this beautiful afternoon (scoria, beer and groceries), but they’ll come after lunch.

Hope you brought some lunch. If not, Jiménez Cafe just across the tracks serves some pretty good enchiladas.  See you after lunch…(Part II)