Let’s see some derails used on a layout.  I plan to use derails on my “ATSF in Roswell in the 90s” layout, but I have a challenge that I will share later.

B. Smith’s LCN has a number of derails along his layout to protect movements along the line.

Derail at Hirshfield Steel in San Angelo, left side of track near bulkhead flat car. 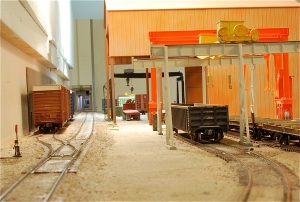 Other end of Hirshfield Steel, note derail on siding at Butt’s recycling, orange, left side of track near brown box car.

Let’s visit the other side of San Angelo. 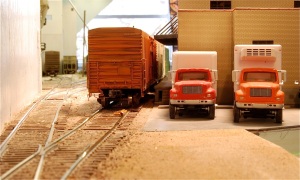 Note orange derail on right side of track at grocery distributor on the other end of San Angelo.

We will now go visit Marathon to check out the use of derails. 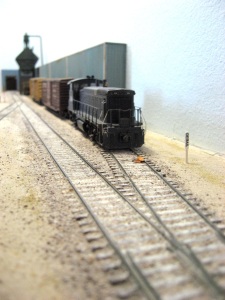 The cotton compress in Marathon has a derail, near locomotive. Looks like the local has holed up at the compress for the evening.

A derail is also used to protect the line at the spur off to the bakery in Marathon.

As is often the case in Marathon, the LCN local is holed up and this time left behind the derail on the bakery siding.

We have seen derails used at a variety of locations on the LCN.  The goal on real railroads is to prevent accidents from unanticipated movements of rolling stock.  Re-railing a few cars is always better than a major collision.  On HO layout, derails can be used to add operating interest, slow down operations and give an increased feel to operations.

In part III of this series, we will see a derail being used in an actual movement on the LCN.