All right, we checked out some of the great architecture (March 16) and some of the eats (March 17) in Zozo.  We also peeked behind the Yucca Bar and Grill to find a large SP locomotive idling.  What now?  What else?  Let’s head to Oscura!

Where’s Oscura?  (Oscura means dark in Spanish.)  Oscura is a wide spot in the road a bit west of Carrizozo.  An interesting feature near Oscura is an abandoned airfield.  Per a neat website entitled, “Abandoned & Little-Known Airfields,” the Oscura Army Airfield was (or is) one of several airfields within the White Sands Proving Grounds.  The date of construction and purpose is unknown, but the author of the site believes it was likely constructed at some time between 1947 and 1962.

Per the site, “The earliest depiction of Oscura AAF which has been located is the 1962 USGS topo map.”

This 1966 map depicted  Oscura AAF as having a single 4,000′ paved runway. See website http://www.airfields-freeman.com/NM/Airfields_NM_Alamagordo.html#oscura for more maps and images.

Aerial images still depict the airfield.  As you can see below from this modern aerial image, the airfield is about 5 miles west of the highway.  It is on the other side of the Lava flow, I discussed in my February 18, 2014 post entitled, “Lava anyone?”

Green dot indicates the airfield just on the other side of the lava flow (black area).  Red dot depicts Oscura. 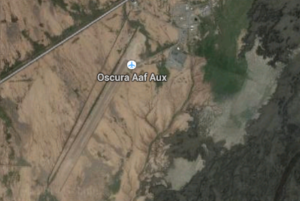 Close up of airfield.

I just know you are asking yourself, “This is really cool stuff, but what about trains?” So let’s get to some of the images I captured on some beautiful days in this beautiful area in the early 1990s

West of Carrizozo near Oscura, I caught some great action along this beautiful, but very isolated stretch of the SP main.line. 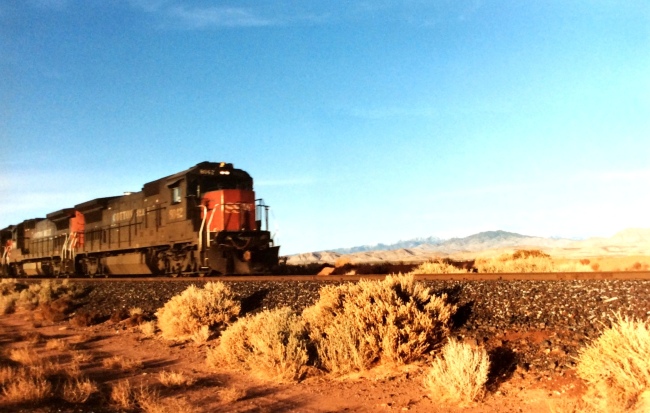 SSW (Cotton Belt) 8042 led a freight in the fading light west of Zozo.

Here’s some action earlier in the day.

Earlier in the day, I caught this SP freight heading west just out of Zozo. Note Rio Grande locomotive behind the lead unit.

The line featured semaphore signalling in the early 1990s!

On another day, I caught this SP container train heading west. Note the old-style semaphore.

I know you want to see some 1990 freight cars too, right?

C&NW and BN cars heading west behind the SSW locomotive pictured above.

Let me close out this post with some action from the Northeast and Canada.

Not to be a fuddy duddy because I enjoy seeing trains today, but watching trains was better in the 1990s.  There was very little graffiti, and the freight cars often featured logos advertising the railroads.

This is the end of this series of posts.  We had a good roadtrip–cool architecture, great food, some railfanning and a bonus of a little aviation history.  I hope you enjoyed the roadtrip to Zozo!